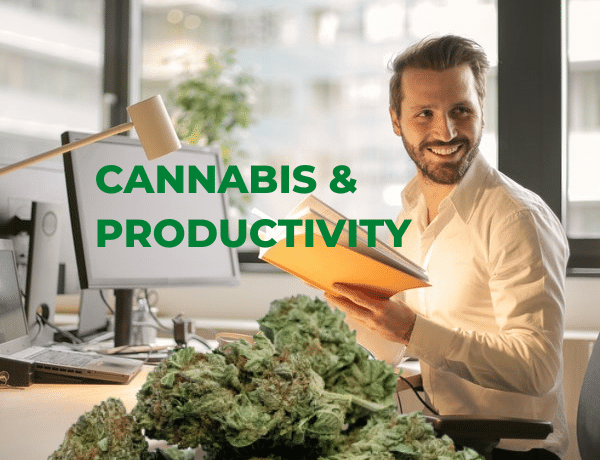 With an increasing popularity and the legalisation of cannabis, there has been much more research conducted on the cannabinoid, which has led to many new discoveries. Where cannabis users were often seen as being tired and having little energy, new studies have shown that cannabis can have the opposite effect and actually improve productivity.

Many marijuana users have reported a higher ability to pay attention to detail, improved concentration, and less anxiety regarding their daily tasks. Other users report feeling so relaxed that they easily drift off to sleep. The difference in the effect of cannabis on users is greatly influenced by the strain of cannabis you consume. Some strains boost your energy levels, while others aid relaxation and sleep.

Either way, research on marijuana consumption has proven that cannabis should not be viewed simply as an intoxicating substance for people to abuse. There are many health benefits of using marijuana responsibly, so it is time to eradicate the stigma around marijuana and enjoy the benefits that cannabis has to offer.

Terpenes are essentially chemicals that determine the smell of plants and plant-based products. While cannabinoids have a big impact on the effect of cannabis, terpenes play a big role in the end result as well. This is due to the complementary effects that cannabinoids and terpenes have on each other. Utilising all the terpenes and compounds found within the entire plant seems to be the most beneficial approach.

Some terpenes found in cannabis plants include:

Terpenes can enhance the effects of cannabis and give more potent results. You can do research about the terpenes within your cannabis products to determine which effect your products will have.

Sorting out the indica-sativa confusion

Despite the differences between the Indica strain and the Sativa strain, both strains have their unique benefits. Depending on what you are looking for regarding your cannabis use, you can choose which strain will be the best fit for you.

If you are looking for a stimulating and uplifting effect, Sativa is your best option. If you want a more calming and relaxing effect, you should opt for Indica. Due to these different effects, it is recommended that Sativa is best to use during daytime while Indica is more suitable for nighttime use.

Why cannabis is unlike other intoxicating substances

Cannabis is also commonly used for medicinal purposes to treat or manage various disorders and diseases. From helping to reduce insomnia and give pain relief, to decreasing side effects of cancer and other illnesses, cannabis is a safe and healthy option, especially when compared to the previously mentioned substances.

For instance, alcohol is widely available and does not have as much stigma surrounding it as cannabis does. However, alcohol abuse is one of the most common addictions and can result in serious chronic health issues such as heart disease, liver disease, high blood pressure, increased risks of strokes, and digestive issues. Alcohol abuse also increases the likelihood of developing cancer.

Opioids have significantly high risk of liver damage and liver failure, which often leads to death.

This is because these substances put more strain on the liver than it can handle. Seizures, strokes, and brain damage are also common effects.

Cocaine travels through the bloodstream, which leads to severe damage to multiple organs. This includes a high risk for heart attacks, strokes, seizures, irreversible lung damage, and skin infections.

These substances are highly addictive and often result in death. However, cannabis alone cannot cause death. When mixed or laced with other substances or buying your products from an unreliable source have health risks, but research has shown that you cannot overdose on reliable cannabis products. Neither CBD nor broad-spectrum cannabis pose the risk of overdosing.

Cannabis might still have some stigma tied to it, but its benefits definitely outweigh any potential side effects that are tied to long-term use. Whether you opt for Indica or Sativa will depend on your desired effect. For relaxation and calming effects, it is best to use Indica. For increased energy and productivity, Sativa should be your go-to option.