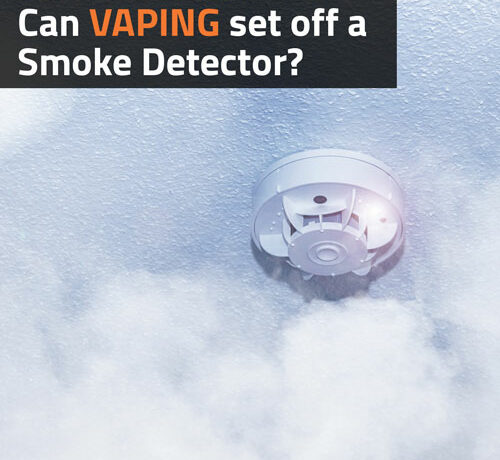 Everything you should know about smoke detectors and vaping

Vaping as a better substitute for smoking has helped countless people in recent years. Its ease of use and convenience resulted in people vaping almost anywhere they get a chance to.

And so, a historically less common problem is brought to surface. The big “will it – will it not” dilemma. This can be tricky when vaping in a room that contains a smoke detector, that is, of course, if you don’t know what to look for.

Whether it be an office, a public building, a cinema, or even someone’s private home – it can cause unnecessary embarrassment and certainly a hefty fine.

Some smoke detectors are perfectly okay with you vaping around them, while others will quickly give you that ringing bell.

In this article we’re going to lay out how likely an e-cigarette is to set off certain types of smoking alarms, what to look for and how to avoid setting off these alarms.

There are generally 4 types of smoke detectors, which are a part of fire alarms.

Ionisation smoke detectors work with a small amount of radioactive material between two electrically charged plates, which ionises the air and creates a flow between the plates. Disrupting this flow of ions with smoke, or vapour, will cause the alarm to trip. The system works by monitoring and detecting particle change within the chamber.

These smoke detectors are less likely to trip than photoelectric detectors, however, you wouldn’t want to vape directly beneath it.

This smoke detector is activated when the beams of light produced by the detector are disrupted by vapour or smoke, and scattered to activate light sensors also within the device. This is the easiest and most effective way to detect vaping aerosol. This is a commonly used smoke detector.

You want to avoid vaping near these, as they’re the most sensitive when it comes to vaping aerosol.

Making use of both Ionisation and photoelectric technology in one device, dual smoke detectors offer comprehensive smoke and fire detection.

They’re generally not that common, but will have a greater chance of activating the alarm when exposed to vapour than any of the two technologies by themselves.

Having a pretty self-explanatory name, you could probably derive that these smoke detectors are the least of our worries as vapers.

They’re obviously only activated by sources of heat such as direct flames, so vaping in the same room where one of these are installed shouldn’t cause an alarm to trip.

How likely will an e-cigarette set off a smoke detector?

It really does depend on the type of smoke detector you’re dealing with, as well as the vaping device you’re using. It can be very likely or not even possible at all. Fortunately, reports of vaping setting off fire alarms are rare.

Generally speaking, you don’t stand much of a risk of disturbing a smoke detector if you don’t vape directly into it. You’d have to vape some pretty thick clouds to activate either of these smoke alarms by simply being in the same rooms as they are, unless you’re directly beneath them. Smoke alarms are designed to detect smoke, and vape devices produce aerosol, which dissipates much faster than smoke.

The use of PG (Propylene Glycol) and flavourings in vape juice is thought to create larger particles than the average steam from a kettle. It has been found that even fog machines can activate fire alarms. So, while setting off the average smoke detector/fire alarm is unlikely – it’s still possible.

Ionised smoking detectors will trip when the flow between the two electrically charged plates are interrupted by vapour, but are not as sensitive as photoelectric detectors.

Photoelectric detectors are extremely sensitive to vaping aerosol, and will be tripped by pretty much anything that imitates smoke and can interrupt the flow of light, even by just the slightest bit.

When it comes to heat-sensitive fire alarms and smoke detectors, you don’t have to worry about setting it off by vaping, naturally.

How to tell if you can vape under an alarm

Knowing what to look for can be the difference between you having to please-explain or preferably not disturbing anyone in the building.

Smoke detectors generally look alike, and there really isn’t a way of telling which type it is just by observing it from afar.

You will have to look at the device itself, so before removing it from its mounting, deactivate it or set it on silent. Some models simply have batteries that can be removed if needed.

It should have an indication on the device itself stating either “Photoelectric” or “Ionisation,” or a symbol with the letters “P” or “I” on the back.

Which types of fire alarm are vulnerable to vapour?

There are only two main types of smoke detectors you should be concerned of activating with vapour.

One is more likely to trip than the other, but be on the lookout for both:

Ionisation alarms: These are sensitive to small particles of smoke and utilise two electrically charged plates and a small amount of radioactive material. When smoke or vapour enters the chamber (the smoke detector), the electricity between the two plates is disrupted, tripping the alarm.

Optical alarms: These much more sensitive smoke detectors work by beaming infra-red light. When vapour or smoke particles enter the chamber, they scatter the beams of light to activate light sensors. These sensors are in the form of infra-red LEDs which pulse a beam of light into the sensor chamber every 10 seconds or so to check for smoke particles.

Heat alarms: These are mostly used in kitchens and the least probable to trigger an alarm because of vapour. They’re obviously heat activated and since vaping does not produce any significant heat, you have nothing to worry about.

4 Tips to vape without setting off smoke detectors

First off, we advise not to vape where there is a policy against it.

Policies can sometimes be unfair, but you personally risk a fine, and it can create a bad image for vapers.

It’s not all sour though, there are places where you’re allowed to vape which might have smoke detectors. Offices and warehouses are two examples.

These are great examples of times when it’s fine to vape, but you’d still need to think about being discreet enough not to trip the detector.

With vape safety in mind, we’ve put together 4 simple guidelines to follow to avoid setting off a smoke detector for the wrong reasons.

The most obvious comes first, because it’s what will mostly determine if the alarm trips or not.

If possible, try to locate your desk facing away from the detector to minimise vapour travelling into the chamber.

Extra airflow will help dissipate the vapour, using the window to blow vapour directly outside will naturally have maximum safety.

Another thing that can impact your vapour density is the type of e-liquid you use. PG-based e-liquids create stronger throat hits and less vapour in comparison to VG based e-liquids.

Luckily, PG based e-liquids are better suited for the pod-system vapes discussed above.

MTL and pod system vapers – you are at an advantage here. In other words, just avoid cloud chasing. (For now)

The key here is not putting out a lot of vapour, and these devices are perfect for that. Using DTL vapes will prove to produce more vapour and stand a bigger chance to disrupt smoke detectors.

Devices with lower power usage and higher resistance coils (1 ohm or above) will work perfectly for this scenario. Some modern pod-system devices also utilise sub-ohm coils, so you can hop between the two.

The Uwell Caliburn G2 is one of today’s top-of-the-range pod system vapes. Its draws are nice and tight, and the flavour delivery is superb.

It also has a rotating airflow dial to adjust the airflow. The device is compatible with 1.2, 1.0 and 0.8 ohm coils and supports auto-draw. (no-button functionality)

Next up is Uwell’s Caliburn A2, a slightly smaller and slicker version of the G2. In comparison, the A2 operates on 15W whereas the G2 operates on 18W, making the A2 a coller vaping device overall.

The G2 has a replaceable coil, while the A2 has a fixed coil within the pod. When it comes to airflow, the pod of the A2 can be rotated to adjust the airflow, whereas the G2 is adjustable with an airflow dial.

Moving on, the Vaporesso series, we have the Xros Mini and the Xros 2. Both are very small, discreet MTL vaping devices that work with a pod-system and are some of the most affordable quality vapes on the market today.

Vaperite does not condone or in any way support vaping where it is not permitted, but rather aims to provide information to avoid unnecessary emergency scenarios in this regard.