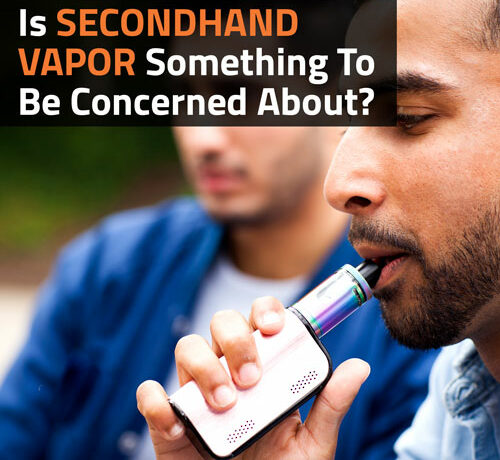 Don’t do this while vaping – here’s what studies say.

The old-school smoking habit is thinning out, and vaping is taking over – especially among the youth and women.

And while the youth contribute significantly to second-hand vaping, we’re not saying it’s always their intent. Many people have since started vaping and because of the lack of laws surrounding vaping, people tend to vape recklessly.

The laws around vaping are still hazy and social guidelines differ largely from place to place, and person to person. Some may think of it to be a healthier alternative to smoking and thus allow it in places where smoking was once forbidden, while others see it as no different, or worse – even more damaging to the people around you.

Some people have even gone as far as blatantly stating that second-hand vaping causes cancer, which hasn’t been backed by any solid medical evidence to date. This was simply the public’s reaction to a few recent misleading headlines.

Luckily, the rumours aren’t true. In this article we’re going to discuss why, and provide some tips on responsible social vaping.

What is second-hand vaping?

Second-hand vaping is a term used for when non-vapers are susceptible to the vapour produced by vapers in a public or enclosed space. In other words, inhalation of previously inhaled vapour.

By now, most people know that vaping produces aerosol instead of combusted materials that produce smoke, as with cigarettes – which is nothing alike except for the fact that both contain nicotine. (Some e-juices are completely nicotine free)

As a result, people tend to vape freely and often without second thought to those around them. This is poor vaping etiquette.

Second-hand vapour can be inhaled by others either directly because of close proximity or indirectly in a situation where, e.g. a room is poorly ventilated and is filled with vaping aerosol.

In some cases it can be more noticeable than others, depending on the type of vaping device(s) being used.

What does second-hand vapour contain?

These traces of nicotine and low levels of toxins can vary, but generally are much less than is contained in smoke produced by cigarettes. It is still not 100% safe, health conscious vapers should have this in the back of their mind.

Although there are several studies that show there are no risks to passive vaping, it is not yet clear how harmful second-hand vaping is as it is still relatively new, and its long-term effects are still being investigated.

There is currently no evidence indicating that secondhand vaping causes cancer.

In comparison, second-hand vapour is far outweighed by the dangers of second-hand smoke, but although less harmful than passive smoking, it is still noted that it is not completely safe.

Vape aerosol can contain any/all of these known harmful substances:

Although these low levels of toxins are known to cause cancer, the amount in which they are found in comparison to smoking are much less. (Excluding ultrafine particles, which occurs more than with smoking.)

On the other hand, there are studies that show that non-smokers exposed to passive vaping absorb similar levels of nicotine as people exposed to second-hand smoke. Worth noting here is the fact that many vapers do not vape any nicotine at all, so at the end of the day you won’t really know if you don’t ask, which isn’t always possible.

Remember, vaping is not marketed as a 100% safe-to-use product, but rather originally intended as a smoking harm-reduction tool, or as a step to quit smoking.

But when you are vaping, here are some simple guidelines to follow to avoid upsetting people in public.

5 rules for vaping etiquette when vaping around others

The simple question you need to ask yourself is: “Does passive vaping affect others?” The answer is yes, and in some cases more than others. It will always stay good practice to avoid exposing people to second-hand vape aerosol.

Here are 5 basic rules to follow when vaping in public:

There are many cases in which vaping has become the acceptable alternative to smoking, although smoking is still frowned upon as it always has been. Vapers often receive some leniency when it comes to strict smoking laws, and as such may have attracted more smokers to switch over to vaping.

A classic example is the coming winter months where people are seen enjoying their vape in a corner while staying warm inside, instead of having to bear the cold to have a smoke outside.

Stealth vaping is the act of vaping in a manner that draws the least attention to the fact that you’re vaping. This generally includes reducing the amount of vapour produced, and can include a few other tactics.

Yes, you probably know the term by now. Cloud chasing is when vapers do everything in their power to create the largest, milkiest vapour density that’s humanly possible. This can be a problem in poorly ventilated areas and closed spaces.

It can be confusing sometimes. Some people accept vaping as the better alternative to smoking, whereas many other people still don’t want it anywhere near them.

This can also be dependent on the user – being discreet while you vape can save you a lot of trouble, while being obnoxious can upset people quite easily.

Quite the controversy! While not nearly as distracting as a cigarette smell, it may still upset some, while others may actually be impressed. I’ve seen people rave about vape flavours after a meal – almost like it’s a dessert of its own!

Second-hand vape aerosol can potentially carry nicotine and ultrafine particles, which can be dangerous, although much less than second-hand smoking.

It also includes much less toxins in comparison to cigarette smoke.

Recently, rumours have arised after misleading headlines implying that vaping aerosol can cause cancer. The studies on this topic are ongoing since it is still a fairly new subject, and thus far no evidence has been found detailing that second-hand vaping causes cancer.

Although a much better alternative to smoking, it is still best practice to avoid vaping around strangers. And if you’re not sure, just ask. People are generally lenient with vaping.